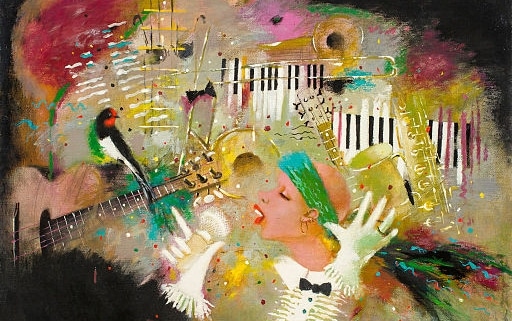 Making transcriptions is crucial in your quest to becoming a better musician. It teaches you the jazz language, how to improvise and so much more. But how do you know which are the best to study? Below you will find the top 10 best jazz transcriptions to learn from!

1. What Is This Thing Called Love? – Red Garland

What Is This Thing Called Love? is one of the best jazz transcriptions to learn from. Studying this recording from Red Garland has taught me a lot about jazz piano. It was one of the first jazz recordings that I listened to and I still love it today. His famous solo is a textbook example of how to play a jazz improvisation.

Red Garland begins his solo at 0.33 with a solo break of two bars. He then plays two choruses over the form. You will notice his long melodic eight note lines over the changes. He plays them in Bebop style, but sometimes adds some blues to it. What makes his way of playing really unique is how he phrases the notes and his fantastic sense of swing!

Wynton Kelly’s solo on Freddie Freeloader from the legendary Miles Davis album Kind of Blue, is another masterclass in swing and jazz piano playing. Right after the band stops playing the theme, Kelly shows everyone how to play the blues in the following four choruses.

His solo begins at 0.45. Listen to his clear phrasing style and some of the great piano licks that you can use in your own playing. Wynton Kelly knew very well how to combine blues and jazz to make it swing.

Keith Jarrett’s version of the traditional song Danny Boy from his Tokyo Solo concert in 2002 is exceptionally beautiful and moving. Jarrett is really playing from the heart and improvising in the moment. His sense of time is also wonderfull with an emphasis on the melody.

Very interesting are also his voicings and reharmonizations of certain parts. You can hear this for example in the fourth bar when he plays a Dbma7(#11) chord, which sounds very surprising.

The recording of Keith Jarrett is very similar to the recording of Bill Evans from 1962, but differs because of style, ideas and arrangement of Jarrett. The tonal center in his recording is F major and in Evans recording it is Bb. When Keith Jarrett plays the theme for the second time he briefly goes to Ab major to return to the original key in the B part.

The recording of Segment by Kenny Barron in collaboration with Dave Holland from 2014 sounds as a real conversation. Without drums, you can hear the vivid dialogue between piano and bass.

The piano solo starts at 0.35 with a solo break of two bars. Barron then plays three choruses over the form. In his improvisation you hear his fluid Bebop phrases, outlining of the chord progression and lots of creativity. His modern sound and jazz piano playing is very recognizable.

If you pay close attention to the way he phrases the notes, it can certainly help to improve your jazz piano playing.

The Latin composition Looking Up by Michel Petrucciani is a great piece of music to learn. As the title suggests, it is an optimistic piece filled with joy and positivity. Listen to the original recording from 1989 and get inspired by his wonderful piano solo.

Looking Up is one of Petrucciani’s best known compositions and he recorded it many times during his career. It has also been covered by various artists.

During my jazz piano studies at the conservatory I wrote my research about Michel Petrucciani. You can find my publication about Petrucciani here.

6. You Must Believe in Spring – Bill Evans

Bill Evans version of You Must Believe In Spring is a lovely rendition of the popular song by Michel Legrand. The song originally comes from the 1967 French comedy film Les Demoiselles de Rochefort that was written and directed by Jacques Demy.

Evans starts the song alone and freely, after which Eddie Gomez joins in the next section. The song really starts in time with the beautiful bass solo by Eddie Gomez, where he reproduces the original melody of the song. At that moment the drums of Eliot Zigmund also join, while Bill Evans masterfully accompanies the solo of Gomez in the background with rich harmonies.

The piano solo of Bill starts at 2.56 when he plays two choruses over the form to finally return to the last section of the theme. Many features of Bill Evans unique playing style can be found in this recording, such as rhythmic displacements and his trademark ”singing” melodic lines.

Listen to Benny Green’s version of Bud Powell’s Celia from 1993 album That’s Right and you’ll notice his joy and enthusiasm. In a very fast swing tempo he plays fluid Bebop lines in his own style that would make Bud proud.

What makes this recording special is that there happens a lot and Benny employs several interesting piano techniques. For example, in the third and fourth chorus Benny plays very hip unison piano lines. This technique is not easy to do as a pianist and Benny is an expert in it.

In the fifth chorus there is a stop chorus. The bass and drums drop out and Benny continues his solo while playing a walking bass in the left hand. In the seventh chorus he even plays a stride chorus. He then returns to the interlude of the theme, when the rest of bandmembers join again. Enough reasons to be in the top 10 of best jazz transcriptions to learn from.

Art Tatum was years ahead of his time and you can hear this well in his beautiful version of Blue Skies by Irving Berlin. His unsurpassed technique, swing and stride playing are all present in this recording.

Tatum needs no introduction in the world of jazz as he is widely regarded as the greatest jazz pianist of all time. The recordings of Art Tatum still have the ability to scare modern day pianists.

Lennie Tristano’s Line Up is a famous improvisation over the changes of All of Me. Tristano recorded the track for the eponymous 1956 album Lennie Tristano and used some techniques that were controversial at the time.

These techniques include overdubbing and speed manipulation. Tristano first recorded the drums and bass. He then slowed them down and recorded the piano part in a lower register. After this he sped everything up to the original tempo with the piano sounding much more darker and percussive then before. Tristano then goes on to play seven choruses over the form.

Rhythm displacement is a key concept in this recording. You can hear this for example in bar 9. Also harmonically there is happening a lot with chordal substitutes and complex lines that are worth investigating.

The Billy Strayhorn classic Lush Life as played by Phineas Newborn Jr. is a real jazz masterpiece and certainly one of the best jazz transcriptions to learn from. A slow and elegant song with a New York feel to it. Newborn recorded his virtuosic version in 1961 for the album A World of Piano!

The track starts with the beginning of Maurice Ravel’s Sonatine 2nd movement in a fast tempo. It then turns into the verse of Lush Life when Newborn uses many improvised lines in contrary motion, reharmonizations and form embellishments. This continuous throughout the whole song. The band enters in the chorus and in the second chorus Newborn uses even more variation to the theme.

Now it is your turn…

The best way to find jazz transcriptions to learn from is to follow your heart and intuition. You should listen to as many different musicians as you can and not limit yourself to a few.

There really is great music out there and I hope this list has inspired you. Now it is your turn to find your favorites and remember to always keep your ears open.

Want to join the discussion?
Feel free to contribute!

This site uses Akismet to reduce spam. Learn how your comment data is processed.

Why Storytelling is Important for Your Jazz Improvisation

We may request cookies to be set on your device. We use cookies to let us know when you visit our websites, how you interact with us, to enrich your user experience, and to customize your relationship with our website.

Click on the different category headings to find out more. You can also change some of your preferences. Note that blocking some types of cookies may impact your experience on our websites and the services we are able to offer.

These cookies are strictly necessary to provide you with services available through our website and to use some of its features.

Because these cookies are strictly necessary to deliver the website, refuseing them will have impact how our site functions. You always can block or delete cookies by changing your browser settings and force blocking all cookies on this website. But this will always prompt you to accept/refuse cookies when revisiting our site.

We fully respect if you want to refuse cookies but to avoid asking you again and again kindly allow us to store a cookie for that. You are free to opt out any time or opt in for other cookies to get a better experience. If you refuse cookies we will remove all set cookies in our domain.

We provide you with a list of stored cookies on your computer in our domain so you can check what we stored. Due to security reasons we are not able to show or modify cookies from other domains. You can check these in your browser security settings.

We also use different external services like Google Webfonts, Google Maps, and external Video providers. Since these providers may collect personal data like your IP address we allow you to block them here. Please be aware that this might heavily reduce the functionality and appearance of our site. Changes will take effect once you reload the page.